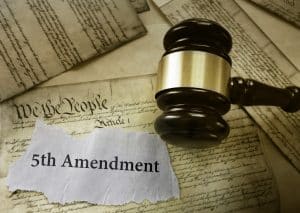 If there is one amendment with which fans of criminal justice shows are familiar, it is the Fifth Amendment. The Fifth Amendment grants defendants several kinds of rights, particularly the right to resist incriminating oneself. What many people do not know is that invoking their Fifth Amendment rights can work differently in civil and criminal cases.

This is what the Fifth Amendment actually says:

No person shall be held to answer for a capital, or otherwise infamous crime, unless on a presentment or indictment of a grand jury, except in cases arising in the land or naval forces, or in the militia, when in actual service in time of war or public danger; nor shall any person be subject for the same offense to be twice put in jeopardy of life or limb; nor shall be compelled in any criminal case to be a witness against himself, nor be deprived of life, liberty, or property, without due process of law; nor shall private property be taken for public use, without just compensation.

What rights does the Fifth Amendment grant defendants in criminal trials and proceedings?

For defendants facing criminal charges, the following rights are granted through the Fifth Amendment:

*A quick note about double jeopardy. You can be tried twice for similar crimes by different jurisdictions, or by “separate sovereigns.” This is why, for example, a person accused of drug trafficking may face charges in the states he or she ran the drugs to and from, as well as by the federal government.

How Does the Fifth Amendment Apply in Civil Litigation and Civil Trials?

Defendants may be able to invoke the Fifth Amendment in a civil proceeding and refuse to answer questions during civil discovery, depositions, or trial if they believe that their testimony will incriminate them. One of the common examples is a defendant who has been accused of causing an accident and injuring someone due to drunk driving.  Drunk driving is a violation of criminal law which may be prosecuted by the government in a criminal proceeding. The victim injured by the drunk driver may also make a civil claim against the drunk driver to recover compensation for the injuries and damages caused by the drunk driver’s actions.

What are the differences between asserting the Fifth Amendment privilege in criminal and civil proceedings?

The law is often complicated, especially when it involves multiple overlapping legal issues involving different areas of law. When you have suffered an injury in any type of accident, you deserve to have a lawyer who is passionate about protecting your rights and knowledgeable about the legal issues relating to your injury claim. The Houston personal injury lawyers at The Kishinevsky Law Firm want to help you come to the best possible outcome for your personal injury case. Call our office at 832-LAW-1111, or submit our contact form today for a free consultation.

Houston personal injury lawyer Rashmi Parthasarathi represents clients in personal injury claims and has spent several years representing clients in product liability cases who were injured by pharmaceutical and medical device companies who put profits before safety of their products. In January 2020, Rashmi Parthasarathi joined the Kishinevsky Law Firm where she continues working to help clients harmed by the wrongful acts of others to obtain justice, especially individuals being taken advantage of by insurance companies and other large corporations.