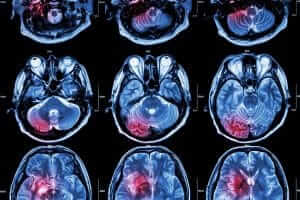 Accidents, particularly car accidents, are common causes of brain injuries. Why? Unlike other parts of the body that remain strapped to the seat during an accident, the head and neck move freely, and the force of the impact can cause soft brain tissue to strike against the hard bony skull, often resulting in a traumatic brain injury.

What is a traumatic brain injury?

The term traumatic brain injury (TBI) describes a wide variety of injuries that can happen to the brain. The damage can either be limited to one area of the brain (focal) or can affect more than one area (diffuse). In addition, the severity of a brain injury can vary from a mild concussion to a severe injury that leads to a coma or death.

There are generally two types of TBI:

What are the symptoms of TBI?

A TBI can lead to many physical and psychological symptoms, some appearing immediately and others becoming apparent days or weeks after the injury. While some traumatic brain injuries are mild and affect the brain temporarily, others that are more severe may result in long-term complications. Some of the signs of a mild TBI include:

A moderate to severe TBI might include any of the symptoms of a mild injury, as well as the following:

Although children suffering from TBI are often unable to communicate headaches, sensory issues, confusion, and other symptoms, they sometimes display the following:

Those who experience a blow to the head that causes behavior changes or symptoms of TBI should seek medical care immediately, and even a mild brain injury requires prompt attention.

What types of Houston accidents can cause a brain injury?

About 1.7 million Americans suffer TBIs, with researchers stating that “adolescents between ages 15 and 19 and adults age 65 and older among the most likely to sustain a traumatic brain injury.” The Texas Traumatic Brain Injury Advisory Council and Texas Department of Health and Human Services estimate that approximately 144,000 Texans sustain a TBI every year, every 30 minutes a Texan is hospitalized with a TBI, and nearly half a million Texans live with a permanent disability caused by a TBI.

According to recent research published in the journal Brain Communications, severe TBI is more common in the occupants of vehicles that are involved in side-impact collisions.

If you or someone you love sustained a TBI due to another party’s negligence, the personal injury attorneys at the Kishinevsky Law firm will help you recover fair compensation for your damages. Call our Houston office at 832-529-1111 or fill out our contact form to set up your free initial consultation to speak with a Houston brain injury attorney today.

In April 2015, Leonid Kishinevsky started the Kishinevsky Law Firm, focusing his practice primarily on personal injury litigation. As a personal injury lawyer providing representation to clients throughout the greater Houston area, he assists people who have suffered economic and noneconomic losses and harms due to the fault of other people or companies.